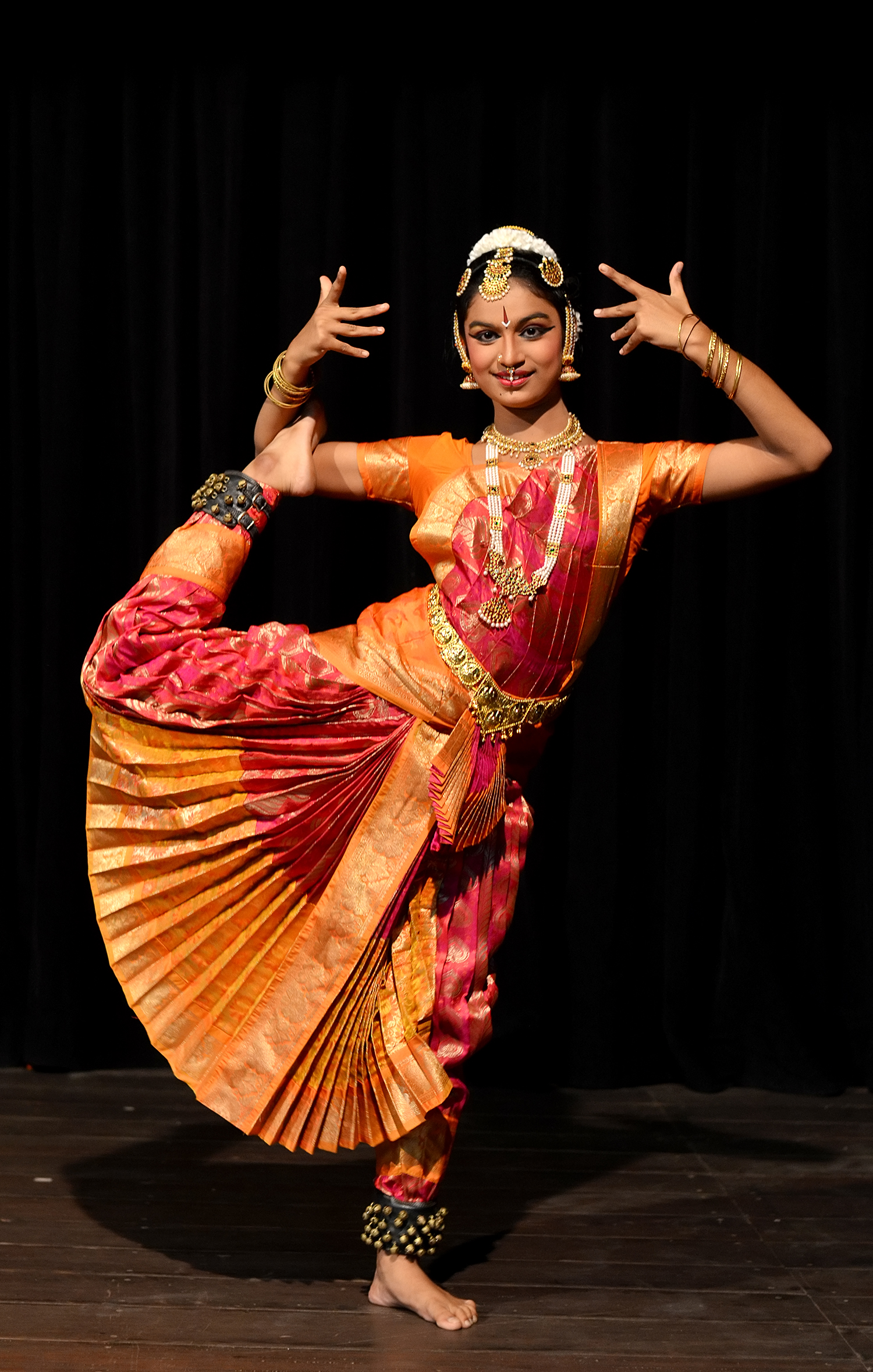 The name Bharatanatyam is a simple derivation from the four most important aspects of dance (in Sanskrit). These are: Bha from Bhava meaningemotion, Ra from Raaga meaning music or melody, Ta from Taala meaning rhythm and Natyam meaning dance.

Native to Tamil Nadu (a state in Southern India), Bharatanatyam is one of the popular Indian classical dance forms. Previously referred to as Sadir, Dasiattam and Thanjavur Natyam, it demands unconditional and complete dedication from the performer. The dynamic and earthy style of this dance makes it one of the most chosen forms of Indian classical art forms. Although Bharatanatyam is predominantly performed by women, men are also known to engage in it. While the women wear a typical sari in the dance performance, men have bare chest and wear a dhoti-like outfit in the lower part of the body
Bharatanatyam or Bharathanatiyam (Tamil:பரதநாட்யம்) is a major genre of Indian classical dance that originated in the Hindu temples of Tamil Nadu and neighboring regions. Traditionally, Bharatanatyam has been a solo dance that was performed exclusively by women, and expressed Hindu religious themes and spiritual ideas, particularly of Shaivism, but also of Vaishnavism and Shaktism.

Bharatanatyam’s theoretical foundations trace to the ancient Sanskrit text Natya Shastra, its existence by 2nd century CE is noted in the ancient Tamil epic Silappatikaram, while temple sculptures of 6th to 9th century CE suggest it was a well refined performance art by mid 1st millennium CE. Bharatanatyam is quite possibly the oldest classical dance tradition of India.

Bharatanatyam style is noted for its fixed upper torso, legs bent or knees flexed out combined with spectacular footwork, a sophisticated vocabulary of sign language based on gestures of hands, eyes and face muscles. The dance is accompanied by music and a singer, and typically her guru is present as the director and conductor of the performance. The dance has traditionally been a form of an interpretive narration of mythical legends and spiritual ideas from the Hindu texts. The performance repertoire of Bharatanatyam, like other classical dances, includes nrita (pure dance), nritya (solo expressive dance) and natya (group dramatic dance).

Bharatanatyam remained exclusive to Hindu temples through the 19th century, was banned by the colonial British government in 1910, the Indian community protested the ban and expanded it outside the temples in the 20th century.Modern stage productions of Bharatanatyam have incorporated technical performances, pure dance based on non-religious ideas and fusion themes.

History Bharatanatyam, which we know today, evolved during the late 18th or early 19th century. In the ancient India, the devadasis performed Bharatanatyam (previously known as dasiattam) in various parts of Tamil Nadu. With society losing its values, the art form fell from its supreme position to a ‘dance that was performed by shameless people’, during 1910-1930s. Nevertheless, the dance regained its lost popularity over the passing years, through the commendable works of renowned Bharatanatyam artists like E. Krishna Iyer. Another prominent name in the dance form is Rukmini Devi Arundale, who played a significant role in modifying mainly the Pandanallur style of Bharatanatyam and bringing it to the attention of the Westerners.

The Steps & Performance Bharatanatyam is always performed with the knees of the dancers bent. The dance form emphasizes on the hand movements to convey different kinds of emotions to the spectator. While performing Bharatanatyam, the artist visualizes his/her body as made up of triangles. The steps of the dance are based upon a balanced distribution of body weight and firm positions of the lower limbs, allowing the hands to cut into a line, to flow around the body, or to take positions that enhance the basic form. In order to perform Bharatnatyam, the artist should have the knowledge of the numerous subtle features of the dance style.

Karanas Described in Natya Shastra, Karanas are defined as the 108 key transitional movements of Bharatanatyam that also feature in other classical dance forms of India. Karana is a Sanskrit word, meaning ‘doing’. Classical dancer Padma Subramanyam is well known for her interpretation of Karanas, which predominantly includes the leg, hip, body and arm movements complemented by hasta mudras, as described in the Natya Shastra.
Hastas The use of expressive hand gestures is a highlighting feature of Bharatanatyam. As the name suggests, hastas are the wide variety of hand symbols used by the performer. Some of the most well known hand gestures of the dance form include Anjali, which is used as a symbol of salutation, when a person greets his/her fellow dancer. Hastas are broadly divided into two types – Asamyukta and Samyukta.
Adavus is defined as a series of steps in Bharatanatyam. The execution of the steps is different from style to style. The 108 principals of adavus are recognized by most schools of Bharatanatyam. As many as 60 adavus are used by many professional dancers. Jathis is the combination of adavus and forms the Nritta passages in a Bharatanatyam performance.
Bhedas And Eye Movements Bharatanatyam is considered incomplete without bhedas and the expressive eye movements of the performer. Neck and eye movements are used extensively in the dance form. The shiro bheda (head movements) comprises of Sama, Udhvahita, Adhomukha, Alolita,Dhutam, Kampitam, Paravruttam, Utkshiptam and Parivahitam.
The Alarippu meaning flowering bud) is traditionally the first dance piece that Bharatanatyam dancers learn and perform in this type of classical dance recital. It is an invocation piece, symbolising the offering of respects to both God and the audience.