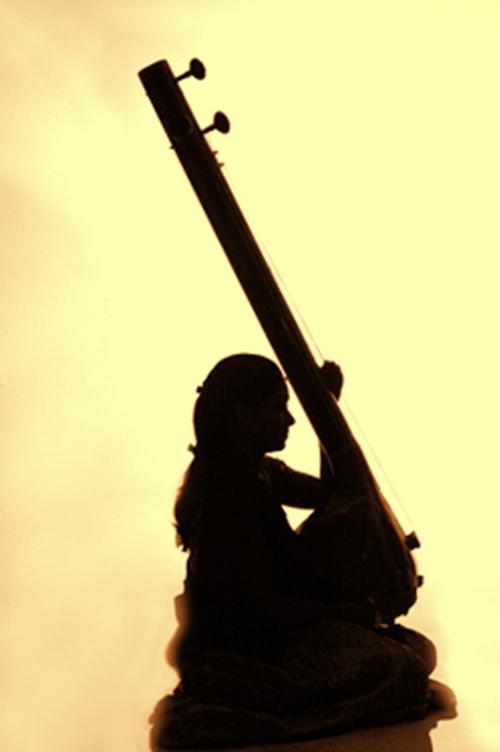 Carnatic music, Karnāṭaka saṃgīta or Karnāṭaka saṅgītam is a system of music commonly associated with the southern India including the modern states Andhra Pradesh, Telangana, Karnataka, Kerala, and Tamil Nadu, but also practiced in Sri Lanka. It is one of two main subgenres of Indian classical music that evolved from ancient Hindu traditions, the other subgenre being Hindustani music, which emerged as a distinct form because of Persian and Islamic influences in northern India. The main emphasis in Carnatic music is on vocal music; most compositions are written to be sung, and even when played on instruments, they are meant to be performed in gāyaki (singing) style.

Carnatic music is traditionally taught according to the system formulated by Purandara Dasa. This involves varisais (graded exercises), alankaras (exercises based on the seven talas), geetams or simple songs, and Swarajatis. After the student has reached a certain standard, varnams are taught and later, the student learns kritis. It typically takes several years of learning before a student is adept enough to perform at a concert.

The learning texts and exercises are more or less uniform across all the South Indian states. The learning structure is arranged in increasing order of complexity. The lessons start with the learning of the sarali varisai (solfege set to a particular raga).

Carnatic music was traditionally taught in the gurukula system, where the student lived with and learnt the art from his guru (perceptor). From the late 20th century onwards, with changes in lifestyles and need for young music aspirants to simultaneously pursue a parallel academic career, this system has found few takers.

Musicians often take great pride in letting people know about their Guru Parampara, or the hierarchy of disciples from some prominent ancient musician or composer, to which they belong. People whose disciple-hierarchies are often referred to are Tyagaraja, Muthuswami Dikshitar, Syama Sastri, Swathi Thirunal and Papanasam Sivan, among others.

In modern times, it is common for students to visit their gurus daily or weekly to learn music. Though new technology has made learning easier with the availability of quick-learn media such as learning exercises recorded on audio cassettes and CDs, these are discouraged by most gurus who emphasize that face-to-face learning is best for students.

Although there are stylistic differences, the basic elements of śruti (the relative musical pitch), swara (the musical sound of a single note), rāga (the mode or melodic formulæ), and tala (the rhythmic cycles) form the foundation of improvisation and composition in both Carnatic and Hindustani music. Although improvisation plays an important role, Carnatic music is mainly sung through compositions, especially the kriti (or kirtanam) – a form developed between the 14th and 20th centuries by composers such as Purandara Dasa and the Trinity of Carnatic music. Carnatic music is also usually taught and learned through compositions.

Carnatic music is usually performed by a small ensemble of musicians, consisting of a principal performer (usually a vocalist), a melodic accompaniment (usually a violin), a rhythm accompaniment (usually a mridangam), and a tambura, which acts as a drone throughout the performance. Other typical instruments used in performances may include the ghatam, kanjira, morsing, venu flute, veena, and chitraveena. The most outstanding performances, and the greatest concentration of Carnatic musicians, are to be found in the city of Chennai.

Like all art forms in Indian culture, Indian classical music is believed to be a divine art form which originated from the Devas and Devis (Hindu Gods and Goddesses), and is venerated as symbolic of nāda brāhman.Ancient treatises also describe the connection of the origin of the swaras, or notes, to the sounds of animals and birds and man’s effort to simulate these sounds through a keen sense of observation and perception. The Sama Veda, which is believed to have laid the foundation for Indian classical music, consists of hymns from the Rigveda, set to musical tunes which would be sung using three to seven musical notes during Vedic yajnas.The Yajur-Veda, which mainly consists of sacrificial formulae, mentions the veena as an accompaniment to vocal recitations. References to Indian classical music are made in many ancient texts, including epics like the Ramayana and Mahabharata. The Yajnavalkya Smriti mentions vīṇāvādana tattvajñaḥ śrutijātiviśāradaḥ tālajñaścāprayāsena mokṣamārgaṃ niyacchati (“The one who is well versed in veena, one who has the knowledge of srutis and one who is adept in tala, attains salvation without doubt”). Carnatic music is based as it is today on musical concepts (including swara, raga, and tala) that were described in detail in several ancient works, particularly the Bharata‘s Natya Shastra and Silappadhikaram by Ilango Adigal.

Owing to Persian and Islamic influences in North India from the 12th century onwards, Indian classical music began to diverge into two distinct styles, being Hindustani music and Carnatic music. Commentaries and other works, such as Sharngadeva‘s Sangita Ratnakara, further elaborated on the musical concepts found in Indian classical music. By the 16th and 17th centuries, there was a clear demarcation between Carnatic and Hindustani music; Carnatic music remained relatively unaffected by Persian and Arabic influences. It was at this time that Carnatic music flourished in Vijayanagara, while the Vijayanagar Empire reached its greatest extent. Purandara Dasa, who is known as the father (Pitamaha) of Carnatic Music, formulated the system that is commonly used for the teaching of Carnatic music. Venkatamakhin invented and authored the formula for the melakarta system of raga classification in his Sanskrit work, the Chaturdandi Prakasika (1660 AD). Govindacharya is known for expanding the melakarta system into the sampoorna raga scheme – the system that is in common use today.

Carnatic music was mainly patronized by the local kings of the Kingdom of Mysore and Kingdom of Travancore in the 18th through 20th centuries. Some of the royalty of the kingdoms of Mysore and Travancore were themselves noted composers and proficient in playing musical instruments, such as the veena, rudra veena, violin, ghatam, flute, mridangam, nagaswara and swarabhat. Some famous court-musicians proficient in music were Veene Sheshanna (1852–1926) and Veene Subbanna (1861–1939),among others.

With the dissolution of the erstwhile princely states and the Indian independence movement reaching its conclusion in 1947, Carnatic music went through a radical shift in patronage into an art of the masses with ticketed performances organized by private institutions called sabhās. During the 19th century, the city of Chennai (then known as Madras) emerged as the locus for Carnatic music.