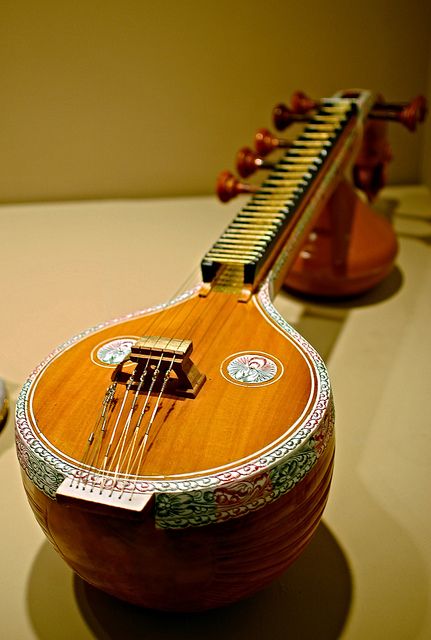 The Veena (Sanskrit: वीणा, IAST: vīṇā), also spelled as Vina or Beena or Bina, is a multistringed chordophone of the Indian subcontinent. It is an ancient musical instrument that evolved into many variations, such as lutes, zithers and arched harps. The many regional designs have different names such as the Rudra veena, the Saraswati veena, the Mohan veena and others.

The North Indian design, that has been used in classical Hindustani music, is a stick zither. About 3.5 to 4 feet (1 to 1.2 meters) long to fit the measurements of the musician, it has a hollow body and two large resonating gourds under each end. It has four main strings which are melody type, and three auxiliary drone strings. To play, the musician plucks the melody strings downward with a plectrum worn on the first and second fingers, while the drone strings are strummed with the little finger of the playing hand. The musician stops the resonating strings, when so desired, with the fingers of the free hand. The Veena has been generally replaced with the Sitar in north Indian performances.

The South Indian Veena design, used in classical Carnatic music, is a lute. It is a long-necked, pear-shaped lute, but instead of the lower gourd of the north Indian design it has a pear shaped wooden piece. It too, however, has 24 frets, four melody strings, three drone strings, and played quite similar. It remains an important and popular string instrument in classical Carnatic music.

As a fretted, plucked lute, the Veena strings can produce pitches in full three octave range. The long hollow neck design of these Indian instruments allow portamento effects and legato ornaments found in Indian ragas. It has been a popular instrument in Indian classical music, and one revered in the Indian culture by its inclusion in the iconography of Saraswati, the Hindu goddess of arts and learning.[1] These continue to be used, albeit with different designs, in Carnatic classical music and Hindustani classical music.

The Sanskrit word Veena (वीणा) (sometimes transliterated as vina) in ancient and medieval Indian literature is a generic term for plucked string musical instruments. Veena is mentioned in the Rigveda, Samaveda and other Vedic literature such as the Shatapatha Brahmana and Taittiriya Samhita. In the ancient texts, Narada is credited with inventing the Veena, and is described as a seven string instrument with frets. According to Suneera Kasliwal, a professor of Music, in the ancient texts such as the Rigveda and Atharvaveda ( both pre-1000 BCE), as well as the Upanishads (c. 800–300 BCE), a string musical instrument is called Vana, a term that evolved to become Veena. The early Sanskrit texts call any stringed instrument as Vana, and these include bowed, plucked, one string, many strings, fretted, non-fretted, zither, lute or harp lyre style string instrument.

The Natya Shastra by Bharata Muni, the oldest surviving ancient Hindu text on classical music and performance arts, discusses Veena. This Sanskrit text, probably complete between 200 BCE and 200 CE,[15] begins its discussion by stating that “the human throat is a sareer veena, or a body’s musical string instrument” when it is perfected, and that the source of gandharva music is such a throat, a string instrument and flute. The same metaphor of human voice organ being a form of veena, is also found in more ancient texts of Hinduism, such as in verse 3.2.5 of the Aitareya Aranyaka, verse 8.9 of the Shankhayana Aranyaka and others. The ancient epic Mahabharata describes sage Narada as a Vedic sage famed as a “vina player”.

The Hindu goddess Saraswati with Veena instrument. The oldest known Saraswati-like relief carvings are from Buddhist archaeological sites dated to 200 BCE, where she holds a harp-style Veena.

The Natya Shastra describes a seven string instrument and other string instruments in thirty five verses, and then explains how the instrument should be played. The technique of performance suggests that the Veena in Bharata Muni’s time was quite different than the zither or the lute that became popular after Natya Shastra was complete. The ancient Veena, according to Allyn Miner and other scholars, was closer to a harp. The earliest lute and zither style Veena playing musicians are evidenced in Hindu and Buddhist cave temple reliefs in the early centuries of the common era. Similarly, Indian sculptures from the mid 1st millennium CE depict musicians playing string instruments.[10] By about the 6th century CE, the goddess Saraswati sculptures are predominantly with Veena of the zither-style, similar to modern styles.

The Tamil word of Veena is yaaḻ (யாழ்) (often written yaazh or yaal). It is in the list of Musical instruments used by Tamil people in Tirumurai dated 6th to 11th century. A person who plays a Veena is called a vainika.[citation needed]

The early Gupta veena: depiction and playing technique[edit]
One of the early veenas used in India from early times, until the Gupta period was an instrument of the harp type and more precisely of the arched harp. It was played with the strings being kept parallel to the body of the player, with both hands plucking the strings, as shown on Samudragupta‘s gold coins.[citation needed]