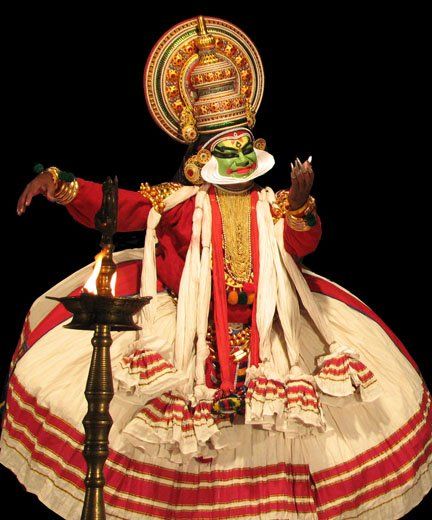 Kathakali (Malayalam: കഥകളി, kathakaḷi) is one of the major forms of classical Indian dance. It is another “story play” genre of art, but one distinguished by its elaborately colorful make-up, costumes and face masks wearing actor-dancers, who have traditionally been all males. Kathakali primarily developed as a Hindu performance art in the Malayalam-speaking southwestern region of India (Kerala).

Kathakali’s roots are unclear. The fully developed style of Kathakali originated around the 17th century, but its roots are in temple and folk arts such as Kutiyattam and religious drama of southwestern Indian peninsula, which are traceable to at least the 1st millennium CE. A Kathakali performance, like all classical dance arts of India, includes music, vocal performers, hand and facial gestures to express ideas, and footwork. However, Kathakali differs in its style and incorporates movements from the ancient martial arts and athletic traditions of south India. Kathakali is also different in that the structure and details of its art developed in the courts and theatres of Hindu principalities, unlike other classical Indian dances which primarily developed in Hindu temples and monastic schools.

The traditional themes of the Kathakali are folk mythologies, religious legends and spiritual ideas from the Hindu epics and the Puranas. The vocal performance has traditionally been Sanskritised Malayalam. In modern compositions, Indian Kathakali troupes have included women artists, as well as adapted Western stories and plays such as those by Shakespeare and from Christianity.